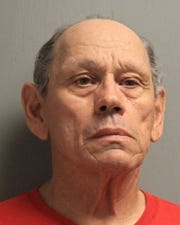 A Pineville man has been arrested on 100 counts of first-degree rape after allegations against him dating back decades were made to the Rapides Parish Sheriff’s Office.

Harvey Joseph Fountain, 71, of the 300 block of Bragg Street, is in the Rapides Parish Detention Center. Detectives say more arrests could be made as the investigation continues.

They’re also asking people with information about Fountain to contact them.

A complaint was filed on April 1 about “possible criminal sexual conduct involving juveniles that occurred in the Pineville area,” reads a release.

It alleged that Fountain had sexually abused juveniles at different residences around the city beginning in the early 1970s through the early 1980s. Kolin substation detectives began investigating, and they eventually secured warrants for Fountain’s arrest on 50 counts of first-degree rape.

He was arrested and booked into jail on April 9. Bond was set at $500,000, but the investigation was continuing.

Bond hasn’t been set after the latest arrest.

Need a Host For Your Website?..Check it out below..

Web Hosting-For brands and growing businesses, it’s critical your website stays up and running at all times. Our dedicated plan combines the power and flexibility of dedicated resources with the customer service and innovation that has made WP Engine an industry leader.